How were Tanks developed?

The first tank was first developed by Leonardo Di Vinci. In some rough sketches he proposed a wooden “tank” that could carry soldiers into battle keeping them safe from troops and from arrows. The tank was powered by the men inside walking on a treadmill to move a set of wheels. The idea was sound but it was never developed.

The idea of using mechanised vehicles in warfare was not thought to be viable until the  First World War. The fields of France had turned into a sea of mud, craters and barbed wire. Nothing could penetrate it. Men and cavalry would stand no chance. The Allied war leaders were very aware that any attempt to break through the German lines would result in a great loss of life that the people at home would never accept. Considering how many had already been killed, support for the war would evaporate. 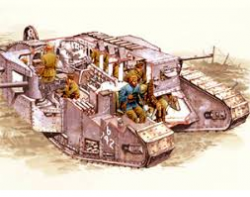 What was needed was a wonder weapon, something that could shorten the war considerably. The Mark 1 tank was created for this role. It was first used at the Battle of the Somme to try and break through the trenches. The nature of War would never be the same again. Soon, all nations attempted to copy and develop their own. There are no longer any Mark 1 tanks available for Tank Driving but you can still have a go in a different tank at  https://www.armourgeddon.co.uk/tank-driving-experience.html

« Thinking about column style radiators, what you need to know
The beautiful beaches and surrounding area of Carmarthen Bay on the South Wales Coast »
Spinity