A brief history of the Isle of Aran. 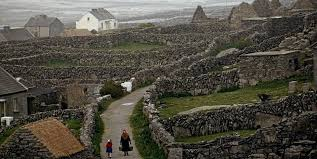 Guarding the approaches to Galway bay are the “stepping stones” of Inishmore, Inishmaan and Inisheer, collectively known as the Isles of Aran. Here the traditions of a past Ireland have remained with most of the inhabitants being bilingual. They keep alive the old Irish language along with English. The island forms part of the Gaeltacht. where Gaelic is the main language. 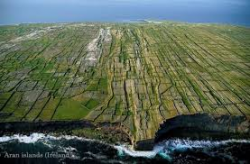 It is believed that the islands were colonised as a way to escape marauding Vikings and trouble on the mainland. The island itself has no real topsoil to grow crops so it was a hard slog for the first settlers to improve it. They used seaweed and sand, digging it in to create nutrients and drainage. There was also an abundance of pilchards, herring and mackerel. Fishing became an important part of the Islands heritage and identity. This was typified by the production of Aran Sweaters in the late nineteenth century. These were made by the wives of the fishermen and became fashionable and practical. You can have a look at the style at https://www.shamrockgift.com/aran-sweaters.

The karst limestone on the island was easy to carve and work and the islanders built solid homes and used stone walls to aid the agriculture and protect it from the strong Atlantic winds. Slowly the islands began to thrive.